In the early 2000s, Arif Hamirani founded an IT company called NetRescue to provide a variety of services from networking to camera systems.

While his company was quite successful, the 2008 Financial Crisis took its toll on nearly everyone and was a slow time for the IT industry in general.

Ever the forward-thinker, Arif knew that adding something more was the answer to staying competitive in a struggling industry and economy.

With roots and experience in IT, Arif wanted something IP-oriented that he could relate to and understand. He did his research and looked at a few IP PBX companies, even starting projects with a few, but ultimately settled on 3CX and its familiar Windows platform.

Concession #1: Cost (Is Windows Worth It?)

Arif partnered with 3CX when it was a brand-new company. He liked the Windows interface and the fact that it was user-friendly for a newbie in the world of telephony.

Gaining traction, NetRescue expanded to 5-10 projects with a variety of clients on the 3CX system.

The only complaint from early on was the cost. 3CX was always on the expensive end of the spectrum, but it was a concession he was willing to make in exchange for the familiarity. (This was concession #1)

The cost of building a 3CX system for each customer includes: a PC, a Windows license, telephones, monitoring, maintenance, upgrades, plus a 3CX license.

Arif Hamirani runs NetRescue in Atlanta and finally broke free after more than 10 years of making-do as a 3CX dealer. 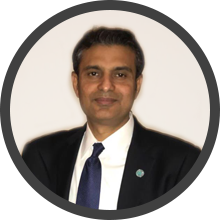 Arif began selling Grandstream telephones to his customers. He was saving on costs, but the drawback was that he was not offering Yealink telephones and their coveted auto-provisioning. (This was concession #2)

Eventually Grandstream came out with its own PBX and 3CX pulled the plug. They announced that it was no longer compatible, and the support ended there – abruptly.

This was the first really bad taste in his mouth. How could a business do something like that: establish a partnership and then just cut it off?

What should he do – buy all his customers a new phone?

This left him in the lurch, but with so much stake in 3CX at this point, he persevered.

At that point Arif realized he was losing customers. Not to his competition as would be expected, but to 3CX itself. How could this be?

The problem begins with the fact that 3CX is not White Label. They put their name and brand on his product. Customers could clearly see that he was offering a 3CX solution.

Not surprisingly, those customers would head to Google and search for 3CX. They realized that they could not only cut out the middleman and go straight to the source, but that the source offered things for free.

3CX would offer free licenses and other promotions to entice them, so it was no surprise when his customers vanished and signed on directly with 3CX.

To an End User this may seem great (though the truth is free things run out and then the support is nowhere to be found). But if you are the 3CX dealer… Where is the trust? Where is the integrity? Where is the Reseller Channel? To many people these things are still as important as a bottom-line.

It was risky to continue going out there with someone else’s brand all over his product, but not wanting to rock the boat, he persisted. (This was concession #3)

Concession #4: The Cloud (Being Left Behind)

The next challenge began 3-4 years ago. Everywhere that Arif went, people were using RingCentral or Vonage: Cloud-based systems.

He began losing projects because buyers wanted hosted rather than premise systems. These companies were happy with the Cloud because all they had to buy was a phone and then subscribe to a monthly service. Why would they want an expensive premise system?

Arif came to the realization that he had two choices: follow the trend into the Cloud or continue losing customers and projects.

He could no longer just sit there with 3CX and a premise PBX while the rest of the world moved into the Cloud. If he wanted to compete with RingCentral, Vonage, and other popular options, the Cloud was the way to go.

Around the time of this realization, 3CX put together a solution they labelled as a “Cloud Platform”, so he decided to give it one last shot. Using his reseller license Arif purchased a hosting server and acquired bandwidth for a SIP trunk. But the SIP trunk did not work.

He reached out to the bandwidth provider and was given a one-page setup guide where 3CX verified how the SIP trunk should be configured. But it still did not work. Arif was new to SIP trunks, so he emailed 3CX support for help.

They rejected the request, saying he had not sold any 3CX licenses in too long of a period to receive support. Though he explained that he was interested in selling their Cloud solutions and needed a working SIP trunk to test, they were unmoved. They required he buy a new license and support if he wanted to test their Cloud system.

The high costs, the Grandstream debacle, the 3CX branding on his products… and now no real access to the Cloud? Arif was set to cut off 3CX, but reluctant to make a radical change.

He came across Yeastar and found that, though higher in cost than Grandstream, they were still less than 3CX and offered a bit more flexibility. This would allow him to stick it out with 3CX while also selling Yealink and Polycom.

Arif knew that the future was in the Cloud, but decided to give 3CX a little more time now that he had discovered Yeastar. (This was concession #4. Noticing a pattern yet? Hitting close to home?)

Tipping the Scale (What is Wrong with 3CX)

Knowing that he should not have to continue “making-do” with second best, Arif continued the search for a solution that would allow him to sell to anyone and everyone with no restraints even into the future.

What he really wanted was to become a full ITSP that could successfully compete with modern solutions. He kept conceding to 3CX, but if he listed out his complaints it was simply too many to continue sweeping under the rug:

Even with the newer 3CX Cloud Platform, the margin was simply not enough to survive on. Perhaps for large enterprises that only dabble in telephony it would seem sufficient, but for someone like Arif it was not enough to sustain a business.

While the familiarity of Windows is attractive, particularly to those that are new to the world of telephony, the challenges that come with Windows are just as well known. Upgrades became more and more frequent and if Arif did not do the 3CX Yearly Maintenance, his system would stop working.

The Reseller Channel and the concept of partnership are deeply undermined when a vendor is not White Label. It is difficult to market and sell a product that has someone else’s brand plastered all over it. Losing customers that go straight to the source is too much of a risk.

To add insult to injury, the customers that go searching for the source will find freebies and promotions from 3CX. Free licenses and other offers were available to Arif’s customers that he, as a dealer, could not offer them. 3CX seemed to care only about the bottom line and not the dealer that was essentially working for them.

In the same way, 3CX was inconsistent with its partners during Arif’s time working with them. The Grandstream fiasco was the first shock to Arif who had felt a certain amount of security until that point. Partnerships are built on trust; too many changes will topple that trust very quickly.

The bottom line was that 3CX had been a good way for him, as the CEO of an IT company, to add phone service to his offering and a get a foot into the ITSP world. But 3CX was not reliable and simply would not take him forward.

It was time to move on.

About three years ago Arif attended ITEXPO in Florida for the first time in search of a true White Label Hosted PBX. He wanted a provider that would work like RingCentral and other big players in the world of hosted.

There he met a number of hosted vendors, one of which was Bicom Systems. In the interest of transparency, Arif admits that Bicom Systems originally did not even make his short list.

The Bicom Systems interface and product seemed too complicated and daunting for someone still new to phone systems. He was accustomed to the familiarity of the Windows-based 3CX system and decided he simply could not choose Bicom Systems.

But when the Bicom Systems roadshow came right to Atlanta, he decided he had nothing to lose by attending. Fate would have it that he ended up in a private meeting with Stephen Wingfield, director of Bicom Systems, and Stephen Corrigan, former 3CX VP of Sales and General Manager, now a Bicom Systems convert.

Arif says the meeting was relaxed with no pressure. He came prepared with calculations on 3CX and 3-4 other White Label options. He knew his budget and what price would convince him to make the switch. If Bicom Systems could match the per-extension-cost that fit his plan, he would give it a chance.

Not only did it fit the budget, Arif was surprised and impressed to find that Bicom Systems wanted to help him grow. He liked the fact that Bicom Systems supports the Reseller Channel and only works with “partners” rather than “customers” or “dealers.”

On the first day with Bicom Systems, Arif stopped selling Yeastar and began the process of moving his customers over to his Cloud Platform hosted by Bicom using PBXware. It may take some time, but he plans to eventually move every single customer over.

First of all, it is a Cloud system. A real one – built on SERVERware 3 – the only virtualization platform dedicated to communications. This comes with a host of benefits, too many to describe here (For more on that, see our paper on 7 Reasons You & Your Customers Should Switch to Hosted).

But one of his favorites is that he no longer has to travel to customer sites. He can manage everything remotely from one interface.

All of the phones he and his customers use are compatible with Bicom (even the sought-after Yealink!).

The cost fits and the platform is just so easy to manage.

More than anything, he is still pleasantly surprised that Bicom Systems listens to him and takes his opinions into account. He likes the support team and the fact that they help him answer customer questions and requests.

The recent upgrade from PBXware version 4.0 to version 5.0 was great – he says he loved the improvements and changes. In summary, his “overall experience with Bicom Systems has been wonderful.”

Since the writing of this article, 3CX has discontinued support for additional Yealink phones. The growing list of “End of Life” devices, which includes Yealink T1-T3 Series, can be found at https://www.3cx.com/sip-phones

If you are a 3CX dealer and want to break free to pursue a better option, we can help.

For resources, including more stories like Arif’s, visit www.bicomsystems.com/3cx.